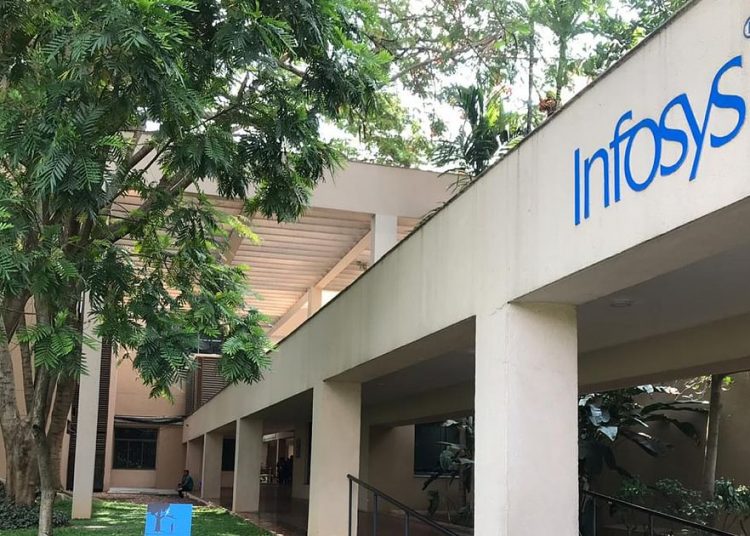 Infosys Ltd. met its revenue and margin guidance for the ongoing fiscal, buoyed by large deal wins and increased client appetite for spending on technology as businesses moved online during the pandemic. But revenue growth for the quarter ended March came in at 2%, below street estimates, whereas margin and net profit contracted sequentially. The company also announced a buyback.

The Bengaluru-based technology services company expects revenue buoyancy to continue and has estimated growth of 12-14% in constant currency terms for the upcoming financial year. The operating margin is forecast to be in the range of 22-24%, lower than the 24.5% upper end of FY21.

Revenue of India’s second-largest software services provider rose 1.5% over the preceding quarter to Rs 26,311 crore in the quarter ended March, according to its exchange filing. That compares with the Rs 26,510-crore consensus estimate of analysts tracked by Bloomberg.

Whereas, revenue growth in constant currency terms stood at 2% for the quarter ended March (sequential growth) and at 5% for FY21.

Infosys COO UB Pravin Rao during the company’s press conference said that although there is some volatility in large deals, overall deal wins are at an all-time high.

Deal wins for FY21 stood at a record $14.1 billion. For the quarter, the company won deals worth $2.1 billion. “A strong momentum exiting FY21, alongside a focused strategy to accelerate client digital journeys, gives us confidence for a stronger FY22,” Managing Director and Chief Executive Officer Salil Parekh said in a statement.

66% of the deal wins in FY21 were net new deals, according to Rao. The number during the fourth quarter stood at 54%.

Other highlights for the quarter:

Shares of Infosys closed 1.91% lower on April 12, a day before the earnings were announced, compared with a 14% jump in the benchmark S&P BSE Sensex. Markets remained closed on April 13 on account of Ambedkar Jayanti.

Night curfew imposed to check spread of Covid-19 in Maharashtra

The role of decentralized networks in a data-abundant, hyperconnected world