Budget session of Telangana Legislature to last for 10 days, till March 26 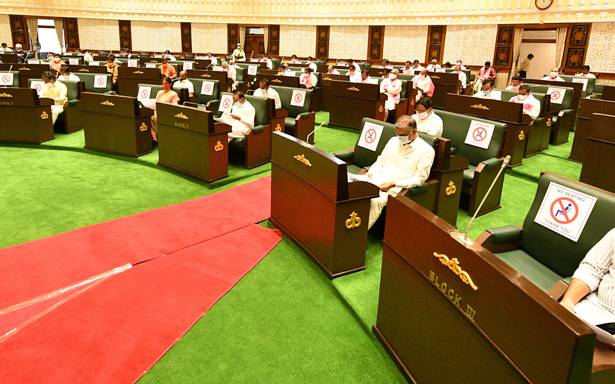 The Budget session of Telangana Legislature will last for 10 days till March 26 with the presentation of Budget for 2021-22 on March 18. There will be no sitting on March 19 and 21.

Length of the seventh session of the second Telangana Legislative Assembly was decided at the Business Advisory Committee (BAC) meeting held after the Governor Dr. Tamilisai Soundararajan’s address to the joint sitting of the Assembly and Council on Monday.

Chaired by Speaker Pocharam Srinivas Reddy, the BAC meeting was attend by representatives of AIMIM and Congress and several Ministers including V. Prashanth Reddy (Legislative Affairs) T. Harish Rao (Finance) on behalf of the treasury benches.

As per the scheduled approved by the BAC, condolence motions would be taken up on March 16 to pay tributes to Nomula Narsimhaiah, who represented the Assembly from Nagarjunasagar Constituency in the present House, and eight former members – members who represented House in the past.

Discussion on the motion of…

NEET 2021 to be conducted only once? Here's what Education Minister Ramesh Pokhriyal said

Kolkata’s children, elderly and poor most affected – THE REPORTING TODAY