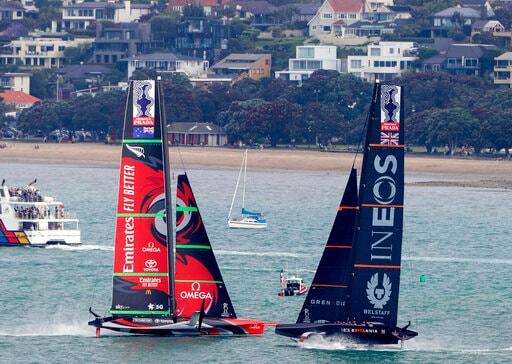 AUCKLAND, New Zealand: Racing in the Christmas Cup prelude to sailings Americas Cup was abandoned Sunday because of a lack of wind on Aucklands Hauraki Gulf.

Only one of four scheduled races the first semifinal between Americas Cup defender Team New Zealand and British challenger INEOS Team UK was started in a fading breeze.

Team New Zealand was leading by more than a lap, or two legs of the six leg course, and was within 60 meters of the finish line when the 45 minute time limit elapsed and the race was abandoned.

The second semifinal between United States challenger American Magic and Italys Luna Rossa could not be started before the time limit for the days racing also elapsed, leaving the final and race for third and fourth places uncontested.

The race between Team New Zealand and Team UK had a bizarre finish as the wind faded almost entirely, meaning neither boat was able to stay on its foils. With their hulls in the water, the boats drifted slowly downwind towards the finish…

MG Hector 2021 to be launched next month in India; key specs