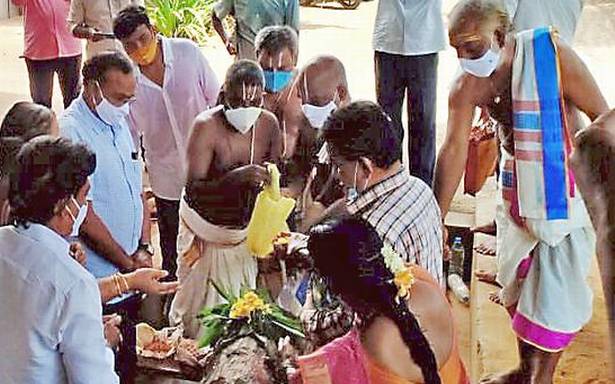 The wood for the vehicle was consecrated at 10.31 a.m.

Endowments Department officials led by priests of Sri Lakshmi Narasimha Swami temple at Antarvedi on Saturday performed a special puja at Ravulapalem, commencing the exercise of building a new 41-feet tall chariot for the temple with teak wood from the Bastar forests of Chhattisgarh.

The special puja was meant to consecrate the wood used in the making of the chariot of Sri Lakshmi Narasimha Swami temple, Antarvedi, under the aegis of Endowment Department Additional Commissioner K. Ramachandra Mohan, Special Officer of the Chariot Committee.

In the early hours of September 6, the century-old chariot was gutted in the fire accident, which is being investigated by the Central Bureau of Investigation (CBI).

“The officials and priests of the temple have performed the puja to the wood at 10.31 a.m. on Saturday, as it is said to be…