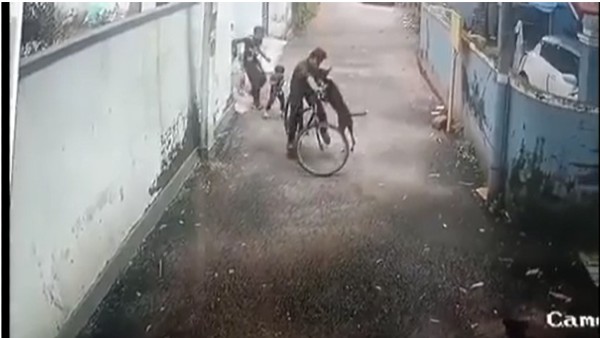 Kozhikode, Sep 12: Incidents of pet dogs attacking others are rising in India resulting in shock and fear amongst people. In another such incident, a boy on a bicycle was attacked by a stray dog in a village in Kerala’s Kozhikode. The entire incident was captured in the CCTV installed in the area and the footage has now gone viral on social media platforms.

The 51-second video clip posted by a user on reddit shows the boy entering a lane on a bicycle when suddenly a black-coloured stray dog comes out of nowhere and pounces on the boy and bites him on the hand.

According to local media reports, the boy has been identifed as a student of Class 7 and the incident took place on Sunday afternoon.

The boy then falls to the ground while he tries to pull himself away from the clutches of the dog. The other scared children rush back inside their homes. When the boy enters the house,…

Planning To Buy A Brand New Royal Enfield Classic 500? Here Are Some Pros And Cons

GHMC reduces containment zones to 52 despite rise in Covid cases