Fishing boats on fire following the murder of a fisherman at Thazhanguda near Cuddalore on Saturday night. Photo: Special Arrangement

Tension gripped the coastal hamlet of Thazhanguda near here on Saturday night after a 36-year-old fisherman was hacked to death by a 10-member gang. Soon after the incident, the victim’s supporters resorted to arson and damaged property.

At least 20 fishing boats, two-wheelers and cars were set ablaze by miscreants during the violence that broke out at 10. 00 p.m.

The victim was returning on ... 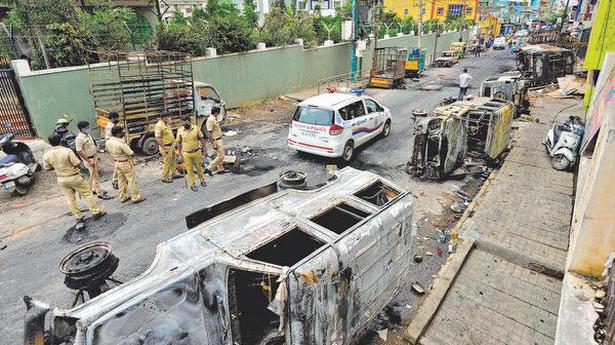 Violence at multiple points; Bengaluru police suspect it was planned

With prohibitory orders in place and residents staying indoors on Wednesday morning, only the heavy deployment of police personnel and the charred remains of several vehicles and structures told the ...