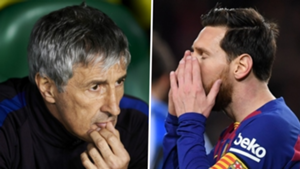 The Argentine once more played down his side's chances of lifting Europe's biggest trophy, but his coach believes they have what it takes

Quique Setien has rejected Lionel Messi's claim that Barcelona were on course for more Champions League disappointment, while admitting there is plenty of room for improvement at the club.

The Catalans have endured a mixed 2019-20 season to date, holding a slim lead over Real Madrid at the top of La Liga despite suffering five defeats to date but bombing out of both the Supercopa and Copa del Rey, the former of ... We utter nonsense: Chhetri fears what fans might hear during closed-door games

India and Bengaluru FC captain Sunil Chhetri however feels that the first stage towards a resumption of sporting action is to ensure training restarts fully. football Updated: May 29, 2020 ...