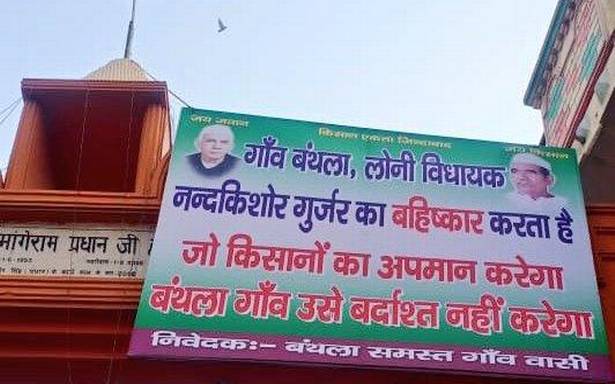 As the tide of farmers at the Ghazipur border swells, the impact of the protest against the three farm laws across western Uttar Pradesh is becoming evident, with banners coming up in villages of Bijnor, Shamli, and Ghaziabad voicing villagers’ anger against the BJP leaders and its supporters.

In Banthla village of Loni, a banner says the village boycotts Loni MLA Nand Kishore Gurjar. The Bharatiya Kisan Union (BKU) has alleged that Mr. Gurjar was present at the Ghazipur protest site on the evening of January 28 with his supporters and would have assaulted farmers had union leader Rakesh Tikait not stood firm. In Bijnor’s Rashidpur Garhi, the banner takes a more aggressive tone.

The banners follow an oblique appeal at the well-attended panchayats (farmers’ gatherings) in Muzaffarnagar and Baghpat urging people to boycott those who were against the farmers.

At the Bajna panchayat in Mathura, Rashtriya Lok Dal leader Jayant Chaudhary made a similar appeal to socially ostracise…

12 kids given hand sanitiser instead of polio drops, hospitalised

Best picks for CSK vs DC match in Mumbai